The iconic buildings housing The Premier Store and The Farmhouse have been in operation for well over 100 years with the smaller Farmhouse building being constructed in 1867 while the main store was built in 1901. Today, the Farmhouse operates as a kitchen and gift store, however, many northern New England residents will remember the long period of the building being a hardware store. On the same title just across the lane is the main building that since its construction has always been a general or department store.

The main store was built by a Jewish businessman, Mr Ernie Roos who arrived in Australia from San Francisco in the 1870s. Roos who was probably attracted to Inverell through his interest in gems bought a business in 1896 on the current buildings site. The old “main” store building was obviously inadequate for Roos’ requirements so he entered into a curious arrangement with his sister-in-law, the then landowner of the site at the time. Roos built the store at his own expense in return for not having to pay rent for 25 years. This agreement outlived them both. An article in the Inverell Times described the building as the “handsome business block in Byron-street” and the “architecture, which is Iconic in style, must strike the observer very forcibly as being unique and attractive”. The foundations of the store were reported as being strong enough to permit a 6-storey building should the need arise.

Few changes have been made to the store over its 100-year history. The most significant change, however, was in 1964 when at a cost of $2000 the artistic craftsmanship which adorned the front was removed for the store to be ‘modernised’ to the present appearance.

Apart from a short period in the early 1900’s the ownership of the buildings and business has been closely linked. Inside the building there has been many changes in both ownership and store design.

Five years after building the store, Roos sold the business to Messrs Pepper and Cutcher. In 1913 Mr Cutcher decided to sell his interest to Mr Pepper. The store was later purchased in 1924 by Mr Fuller and Mr Meyer who had both worked in the store for some time. The business which had a strong emphasis on the country farming community flourished during this period. Mr Meyer died in 1941 and several years later a partnership was offered to Mr Stan Gunson.

In 1955 a Proprietary Limited Company was formed with Mr Fuller and Mr Gunson having equal shares and a store employee Mr Joe Ferris a 5% share interest. During this time Mr Ferris became heavily involved in the management of the company. In 1961 Mr Fuller passed away due to cancer of the throat after maintaining a total service of 54 years. Mr Ferris was bequeathed Mr Fuller’s interests in the business and three years later when Mr Gunson decided to retire, Mr Ferris obtained long-term finance to purchase shares. 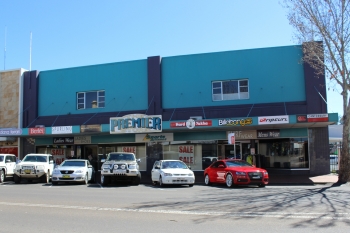